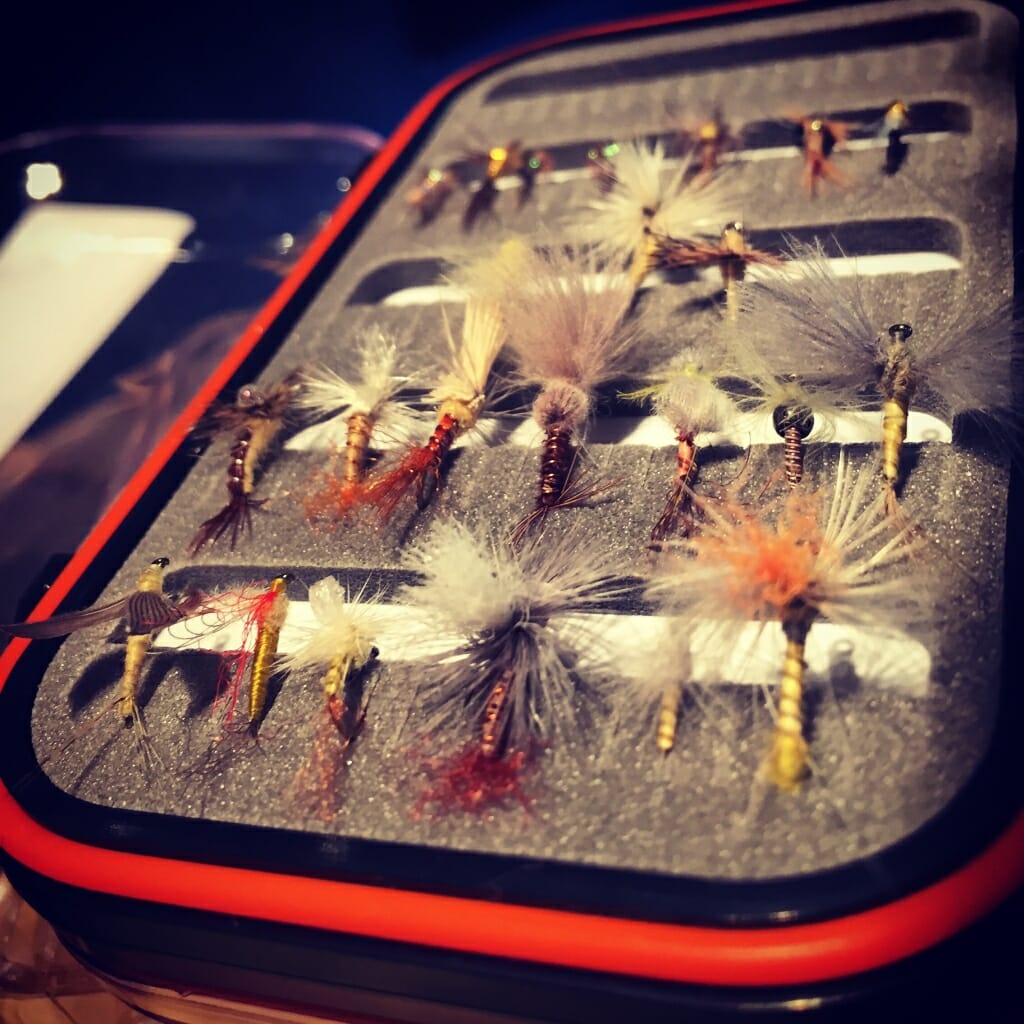 PMD’s are what’s on the menu. Stop by Wolf Creek Angler for the widest selection of Missouri River flies ever assembled under one roof in Wolf Creek Montana.

When I posted late last week we were hoping to see the switch flipped on bugs and dry fly action by the early to middle part of this week but then Christmas came early and we were treated to an epic day of blanket PMD hatches and sipping trout on Friday. I was more than happy to be wrong.

We did endure yet another cold front with some parts of the state even seeing substantial snow over the weekend but the weather didn’t seem to have as adverse of an effect on the fishing as I thought it might. Friday was definitely the best PMD day I’ve experienced so far this season. I wouldn’t go so far as to say that the switch has been flipped but if you are looking to make a day of dry fly fishing you should have ample opportunities from here on out.

Some days are better than others but there are varying amounts of bugs and you can usually find at least a few willing players if you look hard enough.
Nymphing is still your numbers game but expect to have to work at it…it hasn’t been easy but it’s all good once you crack the code. Mind you the code changes daily, and sometimes even hourly but it’s the challenge that keeps you coming back.

Deep nymphing has been productive and when it’s not the short leash has performed (for some). We’re finding fish in faster water, shallow to medium depths and also suspended in the go-to swirly spots. Green Machines have been the most consistent bug (size matters, #16’s, #18’s and #20’s all getting some love depending on the day). Split Case PMD’s , PMD Psycho May, S & M, Redemption, Frenchies, Gold Lightning Bugs, Crack Backs, Military Mays, Peep Shows are all good choices for PMD nymphs. Keep those Tailwater Sows close at hand as well. Some days it’s all they’ll eat, other days they’re hit and miss but keep in mind that there are ALWAYS sow bugs in the river so they are NEVER a bad call. We’ve had a bit of success with Weight Flies and Tung Darts but the Caddis game has not yet been great. Zirdles and Crays are getting the occasional eat but we’ve yet to see the fish really key in on them. We’re hoping it happens soon. After last season’s Zirdlepalooza we went DEEP on the Zirdle stock so come replenish your supply….we’ve got piles of zirdles in all colors and sizes.

Streamers? Maybe worth a shot before the weeds take hold but fading fast. Get dialed on your dry fly and nymphing game and fall streamer fishing will be here before you know it. And before that happens don’t forget HOPPER season will soon be upon us. We’ve already had some success on ants and beetles and we’re hoping it shapes up to be a great terrestrial year.

The river is busy and there are plenty of folks around but with 30 plus miles of fishable water there’s plenty of room to spread out and if you think outside of the box regarding launch times/locations you can often have vast stretches of river virtually to yourself. (Think EARLY or LATE start).

These early weeks of summer are homecoming time at WCA with our regulars from around the world returning once again to enjoy their home away from home. It’s my favorite time of the season with familiar faces all around.

Look for summer sales to start soon at WCA as we begin to clear the way for fall arrivals and don’t forget our third annual Make America Fly Again Half Price Fly Sale coming July 4th.

We hope you make us your first stop on your way to the MO’ for guides, drift boat rentals, shuttles, ice, sun protection, Simms wading gear and sportswear and the much ballyhooed largest selection of Missouri River flies every assembled under one roof in Wolf Creek Montana.