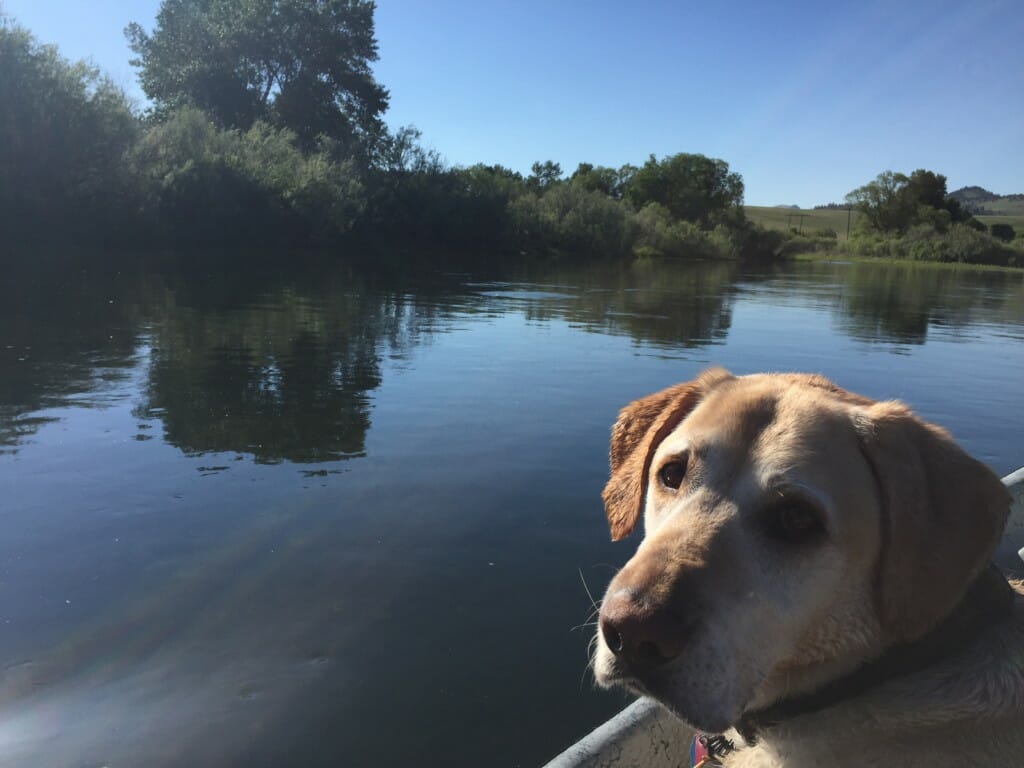 Dog Days on the MO’

The long-awaited Dog Days of Summer Special has returned, giving you yet another reason to drop everything and make your way to Wolf Creek and the amazing Missouri River.

Now through the end of August book a night’s lodging and a full day guide trip and we’ll throw in a second night for FREE.
The Dog Days have arrived but don’t let anyone tell you the fishing is no good in August.

Can we guarantee phenomenal fishing? Of course not, but the fishing has been consistently good with enough tough days mixed in to make it challenging and keep things interesting.

We make it a point to give you honest and up to date reports based on our own real-time experiences as well at the feedback we’re getting from other guides, customers and guests. The last few reports we’ve shared have been very positive for good reason, but we should take this opportunity to mention that there have been a couple of days where things were slow from start to finish. As you might expect this time of year, under the heat of the summer sun, there have also been plenty of days that started strong but shut off during the height (and the heat) of mid-day.

We’re occasionally called out for making things out to be better than they are but you can rest assured that our reports are always honest and we’ll be the first to tell you when things are tough. There’s nothing to gain by painting a rosy picture when the fishing is tough. You’ll find out soon enough for yourself if that’s the case and will likely disregard anything we’re saying as dishonest going forward.

That being said, if our overall experience for a given time period (generally a week in our case) has been good and if we’ve gotten mostly positive reports overall from our guides and guests during that time, we’re going to report that the fishing is good but since we are talking about fishing it’s not to say that you won’t show up and have a slow day out there. It’s the nature of the beast. There are many factors involved, a few of which we have some control over, most of which we do not so the bottom line is that you should utilize our reports for what they are which is a snap shot of the overall productivity of the fishery in a given time frame, but know that no matter how great things may have been it doesn’t mean they’re going to stay that way.

What we can say is that dry fly opportunities have been abundant. PMD’s have all finally come to a close (for the most part) but Tricos and Caddis are filling in the gaps and terrestrials are starting to shine. We always like to throw in a disclaimer when talking hopper fishing as the Missouri is not known as a great hopper river but, that being said, naturals are plentiful out there right now and hoppers are getting eaten daily. So while the MO may not be known as a great hopper river it’s always worth your time to throw them. Some of the biggest browns of the season always fall prey to the hopper. Run in tandem with an ant or drop a nymph to increase your odds. My go to as of late….#10 More or Less Hopper in Peach.

Fish tight to the banks in the hopper zones but don’t overlook those mid-river flats and riffles. The fish are there.

Nymphing remains good with zebra midges, lighting bugs, PT’s, LGM’s, Tailwater Sows, Czechs, Weight Flies, Tung Darts and the rest of the usual suspects all producing with proper placement. Short leashing has had its days though fish are in the depths as well so fish the water you believe in….the fish are there.

We’re open daily at 7 AM for all of your Missouri River fly fishing needs. We’ve got the hardest working guides on the water, clean and affordable lodging, Adipose drift boat rentals and a shop full of everything you need for your day on the water. Check out our great deals on summer sportswear from Simms as we clear the way for fall gear arriving SOON.