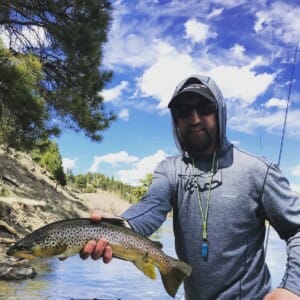 Spring is Streamer Time on the MO’

11,400 CFS and holding. That’s where she’s flowing right now. Out of the comfort zone for wade anglers, perfect for the drift boat brigades.
The dam to Wolf Creek Bridge has been the most consistent bet for the last couple of weeks. Wolf Creek to Craig has had its moments and Craig down has been hit or miss, but mostly miss.

It’s the time of year you need to strike a balance between sharing the best water and actually leaving the good spots to make room for the next wave. There are row arounds that can support quite a few boats. It’s best if you don’t drop anchor in these and it’s also the right thing to do to move on after you’ve caught some fish. How many is enough? It’s subjective for sure, but typically if I’ve run through a busy run a half a dozen times or so and hooked up on every run and the next run doesn’t produce then I’ll move on, especially if there are more boats joining in. Others stay longer and that’s fine but the whole point is to be as considerate as possible. Share the water!

Tailwater sows, Yum Yums, Soft Hackle sows, more tailwater sows, Pill Poppers, Pink Bead Rays, Pederson’s Sows, Firebead Rays….notice the trend? Fly selection is fairly simple right now. Anything sowbug should get it done though you might throw in a Rainbow Czech, an Amex or a worm just to mix it up a bit. We’re still concentrating on the slower, deeper water though we’re starting to pick up fish in more transitional water as well. Take some time and watch what’s happening around you. Take notice of the water the guides are fishing and mimic their behavior. Not sure what they’re using or how they’re using it? Ask them. Most guides are friendly and accessible and more than happy to help you out.

Midges a plenty out there but not much happening on top. We’re still waiting on BWO’s to start. I have heard rumors of a few here and there so it shouldn’t be long now.

The rumors you’ve heard about streamer fishing are true. It’s not that great right now but you can rest assured we’ll continue to do it and you’ll be the first to know when things turn on. We’ve had decent windows of time and/or certain water which produce on some days but we’ve yet to have a day where they were chasing all day. Don’t give up. It’s the best time of the year for streamer fishing….honest. You can always switch back and forth between the nymphing and throwing streamers but I usually opt to stick with streamers no matter what. That being said, it makes perfect sense to nymph the good nymphing runs since you’re right there.

We’re not sure where the flows are headed but we’re hoping they’re dumping in moderately large doses now to ease up on the flows next month. I can’t tell you that’s what’s happening but I hope it is.

We’ve had a few really nice weather days out there with temps actually approaching 80 last Friday but it appears as though winter is about to take another last gasp. Snow is in the forecast beginning on Sunday and running through Tuesday and it looks like it could be a substantial spring snow event with several inches predicted for Sunday and Monday. We’ll see highs in the mid 30’s and overnight lows in the high 20’s but it looks like normal weather will return by the middle of next week. Enjoy these next couple of days of mild weather and come prepared if you’re planning on being here early next week. Dig those winter clothes back out and bring them with you. We can help you with anything you forget. Plenty of hats and gloves and cold weather wear still hanging around at the best prices of the season.

Lodging has hit its stride. It’s great having a crowd around here again. We’re booked solid for the weekend but there are rooms available starting on Sunday (just in time for the snow).

We’ve already implemented our extended spring hours to meet the morning rush. The shop is open daily at 7:30 am and we’ll likely push that to 7 AM at some point in May but for the time being you’ll find us here from 7:30 AM to 5:00 PM daily. We’re open earlier than the rest so make Wolf Creek Angler your first stop on your way to the river for shuttles, bugs and a multitude of other Missouri River essentials.