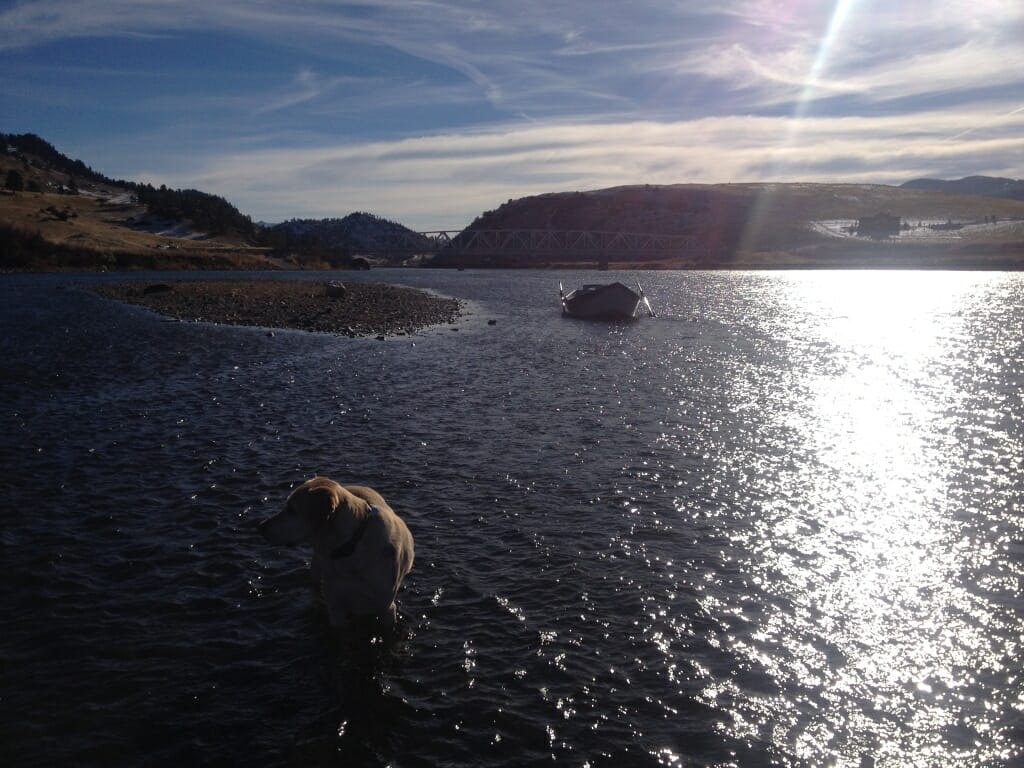 It’s hard to believe but March has all but passed us by and while  we traditionally expect March to come in fiercely like a lion and go out gently like a lamb it looks like the winter lion is going to stick around for a while yet.

Rain and snow are likely tomorrow with gusty south southwest winds in the afternoon ushering in a cold front which will drop us into the teens tomorrow night. We’ll see a high of only 32 on Saturday with a chance for some snow but Sunday looks better with temps back near 50. Maybe not the ideal weekend to fish the Missouri but sooner or later we’ll get there.

We definitely saw an increase in traffic this week with spring breakers taking advantage of some decent weather and enjoying the sunshine on the windy MO’. Fishing reports have been inconsistent but overall I’d say it’s been fair for most. As you would expect those who fish here often are having pretty good luck out there while those who are here for the first time or only hit it once or twice a year have been having a tougher go of it.

Nymphing is your best bet for numbers and not much has changed on the bug front. Anything with a pink bead works more often than not and firebeads are getting it done as well. The hottest bug of the spring thus far has been Pederson’s Sow (available exclusively at Wolf Creek Angler and currently in short supply but more are on the way). Pill poppers, Lucent Bead Rays, UV Crush, Bubble Yums, Pink Radiation Baetis and Wayno’s Cotton Candy have all been catching plenty of fish. Don’t shy away from black Zebras, tailwater sows, firebead rays etc. I’m still sticking with a #12 Pink Amex for a lead fly more often than not but Tungsten Rainbow Czechs, Casne’s Pinkalicious, Pink Weight Flies and Bubble Yums work too. Some have gone to the worm and done well.

Fish are still holding in the slower, deeper runs but we are starting to see a migration to transitional water so  fish the slow stuff but don’t be afraid to hit that medium fast, medium depth water as well. Some are fishing deep rigs and doing fine, we’ve been sticking with a 7′ – 8′ overall depth, sometimes with no weight, sometimes with a bb.

Streamer fishing has been hit or miss but if you stick with it throughout the day you should encounter at least a hot stretch or two. Kreelex, Craven’s Dirty Hippy, Sparkle Minnows, Lynch’s Drunk and Disorderly, Baby Gongas, Polar Leeches, Montana Minnows, Clousers and ZK’s Son of Bunny in pearl and MK Ultra in grey (both available exclusively at WCA) have all been effective. Greys, whites and olives have been good but as I say often fish what you like and what you have confidence in…it makes all the difference in the world.

Midges a plenty daily. Some days the fish are on them, some days they aren’t. Keep that dry fly rig at the ready. I’ve been running a hi-vis para adams with a Bucky’s Midge Cluster and haven’t seen any reason to switch it up but any Griffiths gnat or midge cluster ought to do the trick.

Overcast days have definitely been better overall (especially for streamer fishing) but we’re catching plenty of fish in the sun as well. Fish when you can.

Our spring lodging and guide trip special has been gaining in popularity as folks come to realize what an absolute STEAL of a Deal it is. Once again, that’s two nights of premium lodging and a full day guide trip for one or two anglers for just $550. We challenge you to find a better deal on the MO’.

We’re at about 50% open on our lodging just waiting for temps to stabilize before we open the rest but hopefully it won’t be long. Cabins and bungalows available now, motel rooms open soon.

The shop is rapidly filling up with new gear from Simms, Redington, Echo, Ross and more and we’re thrilled to announce that we are now your Exclusive Missouri River dealer for Damsel Fly Fishing, an AWESOME line of women’s fly fishing gear and apparel made right here in Montana. Check them out at www.damselflyfishing.com. We’re also excited to announce that we are now featuring Douglas Fly Rods. More on this soon but in the meantime check them out at   douglasoutdoors.com We’ll let you know as soon as we have them in. We’re sure you’re going to love these rods and we’re hearing  nothing but good things from the other dealers around the region.

It may not feel like it and it may not look like it just yet but spring is definitely here and we can’t wait to see you back on the Missouri.