A nice piece of writing from a friend of the cause. We always love seeing how our guests are moved by the MO’. 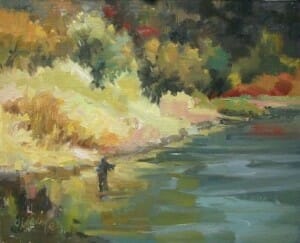 It had been a memorable morning, having caught two browns and a rainbow — two on top and one below, to keep the ratio in tact — on a favored bend in the Missouri River near Craig.

My son and I enjoyed each other again, having yesterday spent a long, contentious drift on the river five feet apart on a rented boat. We could do no right in the fishing department, straining family relations. I’d seen it all and knew where he should cast. He knew better, and sometimes proved it by catching a fish.

But all in all, the abundance of trout raised by the Missouri treated us like foreigners, which is fitting for folks whose lives allow them to spend precious little time getting to know them.

Yesterday was forgotten on this morning. Cody pulled on waders while chatting about a big brown he caught on the same bend two nights before. A high school graduate five weeks removed, life changed on a dime and a good night’s sleep. What’s to worry an 18-year-old?

The place was crowded. Six cars in the pull-off. You just expect company in July if you plan to fish the biggest spring creek in the world. And the Missouri was fishing in a world class of itself. Pale morning dun mayflies were fading but sufficient, caddis were dominating, and the promise of those tiny trico mayflies — the ones that bound in the millions to build spiraling, ghostly forms – was on the horizon.

No fish were rising early, but Cody keeps his smile. He searches while I reluctantly switch my rig to a pair of weighted nymphs four feet below those spongy, sticky floats. We share shock when a big brown sets himself while I was talking downstream with Cody.
A tenuous fight ends, and photos are taken.

But what am I seeing now? Tricos? Yes, tricos were hatching. Two weeks late by our schedule, but right on time according to theirs.
I had handed my pole to Cody, who given my good fortune had suddenly developed a penchant to nymph. I stood there dumbly with his, which was rigged with a No. 18 Adams. A pod of rising fish had formed upstream.

It was ten casts before I feel him, a broad-shouldered rainbow who plays the bully before going airborne three times. “Not again,” Cody yells out in somewhat feigned disgust. He was growing frustrated.

The rainbow reluctantly came to net and Cody coaxes her back to life. We switch rods again.

Then as mysteriously as the tricos appeared, they left. The river turns quiet except for the occasional trout exercising his muscle on a fly the size of a mole. Their rises sound like rocks getting tossed from the bank.

Cody heads back to a pool upstream, but I suspect he’s moving in the direction of the truck to read. Bless him. A kid who would rather read a novel than yell at his old man on Facebook. Imagine that.

I, too, soon head in that direction, stopping to reflect at a riffle that in five previous passings this week always held fishermen. It was known as an excellent place to nymph, one had told me. And now no one was there. I took a few more steps toward the truck before realizing I was walking away from a golden opportunity.

But after skidding down the hill I found an older gentleman — even older than me — relaxing on the shore. I turn to walk away when he offers, “There’s plenty of room. Go ahead and try it here.”

Turns out his name is Don, a retired painter for the Helena school system. He’d gotten up at 4:30 to hit this particular riffle by 6 a.m. Been there 3 1/2 hours and landed three fish.

Don was my dad’s name.

Don on the river was happy. While his fishing itch scratched, socializing had taken a back seat. He was an affable fellow taken to conversation, and we hit it off.

Eventually I transform my leader back into a nymph rig and start across the riffle. Every flyfishing opportunity comes with its own rhythm. I start close, flipping the line ahead and upstream for a short but natural drift.

I soon find that a longer cast is not difficult and covers more water with the aid of one strong, over-the-top mend.
No takers, though, as I move across the channel. Then my fly sticks on a rock. Don hollers something out, but I explain that I snagged. I pull and fli but the situation is useless.

The only way to save my nymphs is to wade into the fast water and extract them by hand. I tried. But even within feet of the end of my leader it didn’t budge. How deep is it? Can I even tough bottom?

But then … something. Given the uneven temperament of a blur of rushing water you can’t be sure. But maybe something.
And then movement. By God, it was a fish!

“If you can get him over here, it’s calmer. And you can walk in the river here,” Don suggests.
I’m not sure as a calm stretch lays on the opposite side of the river.
But truth be known, I want to land this fish with Don. Maybe I need to land this fish with Don, and he the same.
The brown has other thoughts. He still hasn’t taken a run. It was like he had do laid dwn stakes in the middle of the riffle, his home, and was not about to retreat under duress.

Just as Don was urging me to close the gap, the brown gives up a few feet. Eventually I pull and pump, a sure sign that the trout is tiring.
About ten minutes — fifteen minutes? Who knows? — and the brown leaps three feet in the air with the last of his strength. Now it was close combat.
I pull my cellphone out and hand it to Don for a photo. Cody wouldn’t believe this fish without proof, and who could blame him? Sixteen inches of trout on the river has a tendency to reach 18 inches by shore. A few drinks, and the proportions get out of hand.
The trout does not fit in my net. I have him in there twice but he refuses to fold his body in a time-honored tradition of trout that lose a good fight. On the third try, something happens. I don’t know what. Perhaps he catches the upper nymph on the bag of my net.

But he is gone.

“Did you get a picture?” I ask Don.
“I’m not very good with these new phones,” he replies.
“At least I have a witness,” I continue, somehow smiling.
“You sure do.”

We talk another few minutes about nothing and everything, reaching the mutual conclusion that life’s been good.

“I’ve been really fortunate. Had a good job with good bosses. Have a good pension. And I’m able to be here,” he says, gazing up and through the Big Belts.
But it is time to go, I explained. Cody is waiting, no doubt with face into his latest novel that could be about anything from video games to espionage.
“Has he got it, what it takes to fish here?” Don wants to know.
“I think so,” I say.

Cody greets me with a smile that covers his face. I show him my broken leader and tell my story in as cursory form as I can muster. But better yet, Cody caught three rainbows after leaving me. I want details.

We fish for many reasons. Some call us lazy. They say we’re escaping reality.

But what if the trappings of life are just that?

Then we’re left with memorable mornings on the Missouri.
Me, Cody and Don.