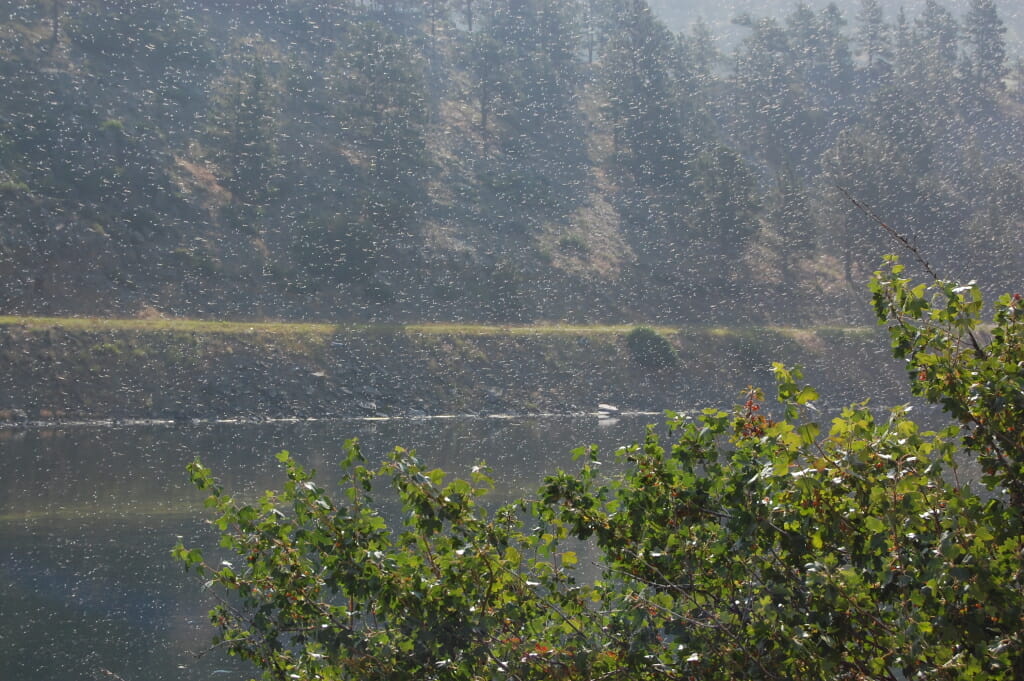 It’s what some of you have been waiting for….Tricos on the MO’.

Others despise the challenges presented by tiny dry flies and finicky fish but for the hard-core DFO purists among you now is the time.

The quiet early mornings at the boat launches are a thing of the past for now as the Trico guys know an early start is critical for a shot at the prime spots during the spinner fall, somewhere around 9 – 10 am.

A week ago I had the ramps to myself at 6 am when I was dropping rental boats. Today I had to wait my turn behind a multitude of early starts with a steady stream coming in behind me.
Early on means early off which works out well as mid-day temps are currently pushing into the 80’s and 90’s with bright sun and minimal cloud cover the norm as of late. Tomorrow looks like a good chance for showers throughout the day before we resume the summer sun and heat through the weekend.

There continues to be a fair amount of evening traffic out there as well. We recommend self-shuttling for these late floats. We’ve been cutting off shuttles at 4 PM and while some may be doing them later than that I don’t think anyone is doing late night shuttling so if night ops are on your agenda please plan accordingly.

There are still some PMD’s around but definitely coming to a close. Tricos in the morning and Caddis in the evening and if that’s not your thing then have it to yourself during the heat of the day and start throwing some foam.

Hoppers and ants are starting to attract some interest. Not a ton of naturals around just yet but there will be soon enough. Fish the hopper (or ant) alone or drop a nymph (LGM, Zebra Midge, magic fly, lightning bug etc) and cover some ground. Hit the banks, hit the mid-river riffles, hit the spots you wouldn’t normally expect to move fish…you might just be surprised by where you find them.

The nymph game has continued to produce albeit somewhat inconsistently with the continued flow fluctuations taking a toll on the fishing depending on the day. We’re sitting at 4920 CFS as of this writing, I’d expect it to maintain in this range from here on out but I’ve been getting this one wrong more often than not so take it for what it is.

We’re open early every day, by 7 at the latest, with boat rentals in the water generally by 6:30 am. The weirdness continues to hamper our lodging and guide trip bookings but we’re plugging along piecing a season together. The point is, we’re getting enough cancellations that we’ve been able to accommodate last minute requests with a fairly high rate of success so don’t shy away from attempting to book those last minute rooms and trips.

It’s summertime on the Missouri, with Dog Days ahead.