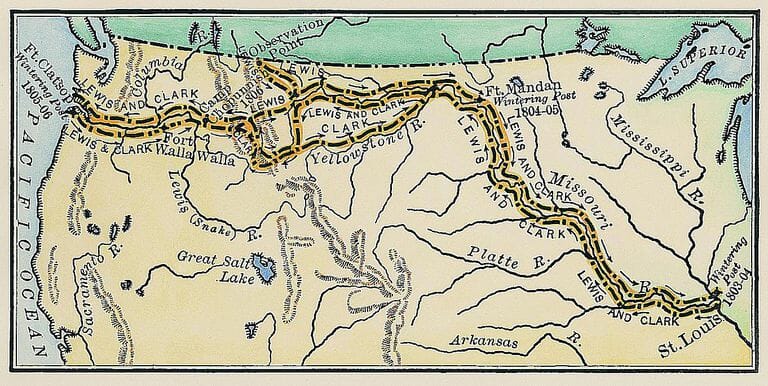 So wrote William Clark in his journal after nearly nineteen months of trekking across the West. Captains Clark and Meriwether Lewis, along with a band of about thirty explorers, had finally reached the Pacific.

They had set out from the St. Louis area on May 14, 1804, with instructions from President Jefferson: see what was out there. The explorers made their way up the Missouri River in boats,
wide-eyed at a land filled with deer, turkeys, geese, and herds of buffalo. Lewis and Clark held councils with the Indians they met. They made maps of their route. They collected specimens –  insects, animal skins, fossils, a prairie dog – and sent them back to the curious Jefferson.

The explorers spent about a month dragging their canoes around the Great Falls of the Missouri. When the river took them as far as it could, they traded with Shoshone Indians for horses and started over the Rockies. The horses often lost their footing on snow-covered trails. The explorers ran out of food and began to go hungry.

They finally stumbled out of the mountains, built canoes, and dashed down foaming waters to the Columbia River. The river widened, slowed, and lay shrouded with fog. When the fog lifted, they found that they had reached the Pacific.

As Jefferson said, the Lewis and Clark expedition was one “of courage undaunted, possessing a firmness and perseverance of purpose which nothing but impossibilities could divert from its direction.” By the time they got back to St. Louis on September 23, 1806, they had traveled 8,000 miles. They brought back reports of a country grand enough to hold any dream.